How to Screenshot on Snapchat Without them Knowing?

iSeeGuard > Android Monitoring > How to Screenshot on Snapchat Without them Knowing? 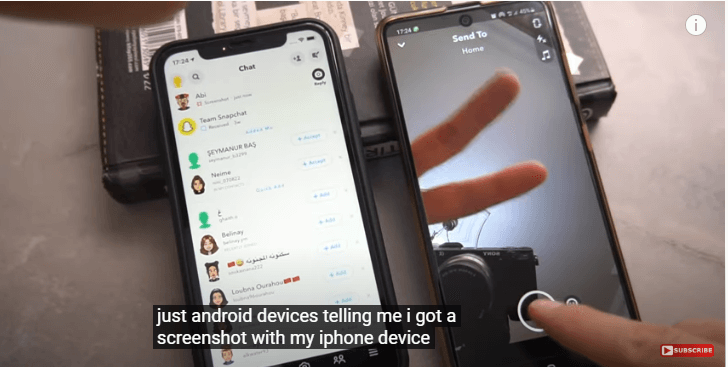 Undoubtedly Snapchat is a popular app among all the social media apps. It engages users in sharing their photos, videos, conversations, and thoughts with their friends. Because of its uniqueness, it is popular in the online domain. Many people use Snapchat daily and share billions of snaps. It is a very captivating and endless activity to explore Snapchat. It is well-known because of its user-friendly interface and several high-quality features.

However, many users feel dissatisfaction with how strict Snapchat can be. But have you ever considered how amazing it would be to save someone else’s snaps without being detected by others?

When Snapchat launched initially, one of its most appealing features was that recipients could not capture or save your snaps without your permission, no matter how scandalous, saucy, sensual, dumb, or otherwise, they were.

People have been attempting to avoid Snapchat’s anti-screenshot feature in any way they can since the app’s launching, and they are far from alone. Almost everyone appears to be questioning the same thing: how to screenshot on snapchat without them knowing?

The Reasons to Screenshot on Snapchat

Precisely if someone is attractive, or some snaps you think will be helpful for you, or you want to keep some snaps as a memory, or you might want to share some snaps of others with your friends then with all the ways of screenshotting Snapchat you can easily get what you want.

Is it Illegal to Screenshot on Snapchat?

It is unethical to screenshot on Snapchat, but it is not illegal to take a screenshot of a Snapchat of someone without their consent. If you use snap for the wrong use, then it would be illegal. Yet, make sure you have a decent reason for taking a screenshot of someone’s snap.

How Can You Tell if Someone Screenshots Your Snapchat?

Ways to Screenshot Snapchat Without Them Knowing

Now we will discuss some ways to screenshot on someone’s Snapchat without being notifying them.

Enabling Airplane mode is one way to save other people’s photos without letting them know. You may capture a screenshot of Snapchat Stories without making any noise using this simple method. All you have to do is to follow these simple steps:

Open Snapshot and go to the snap you are willing to screenshot. Open that snap and completely load it until the icon beside the name turns into a solid square, not a little swirl. Then, turn off all the functions of your device, such as Wi-Fi, blue tooth, cellular data that keeps your mobile phone connected to the internet. Then, enable Airplane Mode on your mobile phone. After enabling Airplane Mode, go to the snap that you have loaded and take the screenshot of that. After screenshotting the Snaps, wait for 30 seconds to turn on your mobile’s internet connection.

For this method of the screenshot, you all need to do is to enable the screen mirroring feature. This method is for Android mobile users. Go to the settings and cast your mobile device to another screen, such as another mobile or TV.

After enabling screen mirroring, go to Snapchat and record the Snapchat video, or you can take a photo of the snap via another smartphone other than that you are using for mirroring without being notified by the person you are stalking. Although, for this method, you need more devices to capture snap.

• Another Phone to Record Method

This method is the simplest way to take a Snapchat screenshot without other people know. If you are willing to get and preserve someone’s snap, here is another method of screenshotting a Snap. You only need to get your tablet or another phone to snag the Snaps. It would be rather appropriate to record a video of the Snapchat story than taking pictures.

For images, go to Snapchat and open the snap you want to capture and load it completely. In this way, the quality of the screenshot is not going to be high. You need to maintain your hand position steady and the quality of the camera of the other mobile to record the snap.

After that, you can crop the image or make additional adjustments to it before using it.

However, this method has one flaw: someone cannot save the screenshot of the snap directly, so you will have to email it to another app like Gmail to receive a copy.

If you do not want to get caught screenshotting, the next step is to reboot your iPhone soon after taking your screenshots. To reboot, follow these instructions.

Immediately click and release the Volume Up button, then the Volume Down button. Then press and hold power on-off Side button after the screen shut down appears.

The Snapchat account from which you took screenshots should be restored to its original state as if you had never opened it in the first place.

Even dare to take a screenshot of someone’s Snap, Snapchat will notify him or her right away, which might be embarrassing at times. But do not worry! Every problem has a solution. In addition, there are several Snapchat Saver apps available to let you save Snapchat photos and stories.

These apps allow you to take a screenshot on Snapchat without alerting anyone else. One of the best apps for this is iSeeGuard. iSeeGuard is compatible with both Android and iOS devices.

• To use iSeeGuard for Android, go to the Google Play Store and download the app. You may now choose screenshot, Screen Recording, Burst Screenshot. Before going for Snapchat, open the Snapchat story you wish to screenshot, then hit the iSeeGuard camera icon that appears on the screen to screenshot Snapchat Stories without being detected.

• To use the iSeeGuard app for iOS devices, you will need to download the app, then log into your Snapchat account. Once you logged in, all your Snapchat Stories will appear in the app, and you can easily snap a screenshot of any Story you need without anyone recognizing it.

We hope that all the methods we have discussed make it simple to capture someone else’s Snapchat Stories without them knowing. Just make sureit is done for pleasure and not to endanger anyone’s privacy or security.

If the person you are screenshotting is careless and does not realize you are screenshotting his or her snaps, then it is no problem. However, be aware and keep your excuse ready because they may know what you have done afterward. But, if you want to remain undetectable, then iSeeGuard is the best choice for you. You can screenshot any snap of anyone without them know. Get iSeeGuard plan now! And start screenshotting without being recognized by others.

ISEEGUARD'S SOFTWARE INTENDED FOR LEGAL USE ONLY.

Installing this licensed software on a device that you do not have monitoring rights may violate the laws of your country or region. You are fully responsible for downloading, installing, and using it. If you choose a monitoring device without permission, iSeeGuard shall not be held responsible. All rights not expressly granted herein shall be reserved to iSeeGuard.